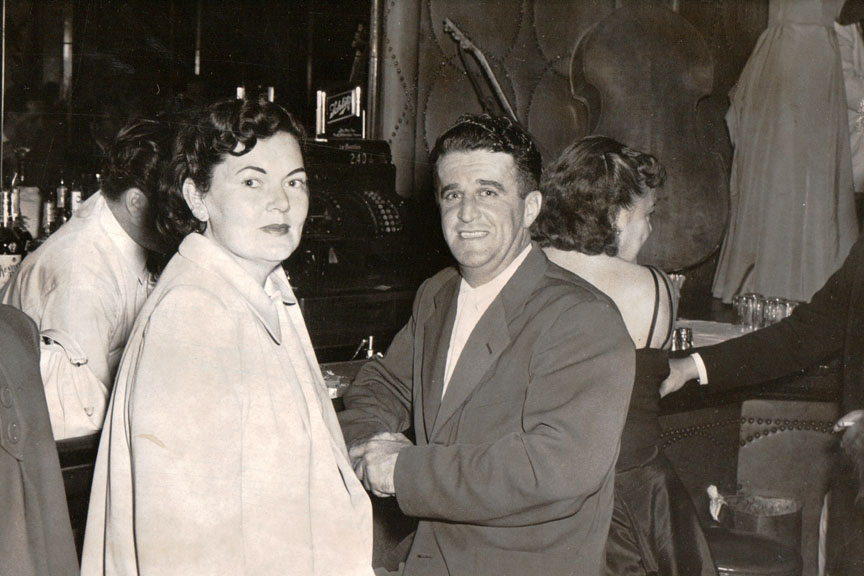 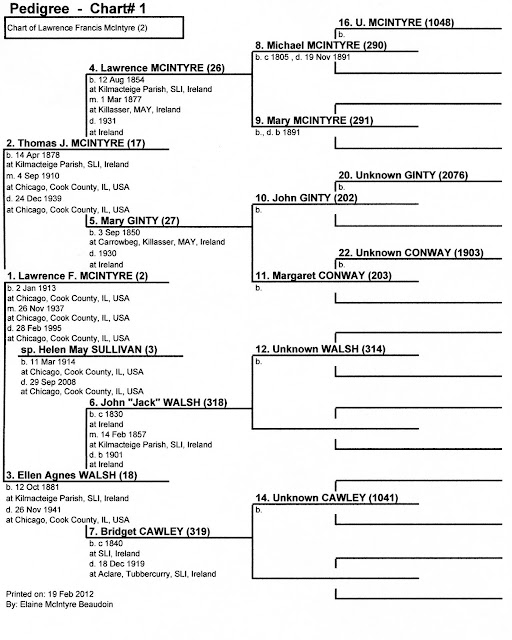 January 2, 2013 is Lawrence Francis McIntyre's 100th birthday.  In celebration of his centennial, some bits of information about him, a few written by his wife, Helen, and photos are presented.

Lawrence grew up on the Westside of Chicago, the second oldest of five children born of Ellen Walsh and Thomas J. McIntyre.  He attended Resurrection grammar school and St. Mel high school.  As a youth, he sold newspapers at the corner of Laramie and Madison.  Helen remembers him as a young boy at the newspaper stand: "I would walk by on my way to the Jewel and he would always say 'Hello'".

When she was asked to describe what Larry was like when she met him again in her teens, she wrote "Typically Irish, nice looking, full of fun, great personality but actually too short for me but I didn't care after awhile.  He had the prettiest blue Irish eyes, long black lashes, [and] black curly hair."

Helen tells of the proposal: "One night I was over at Larry's house at 4737 W. Gladys ave.  I guess his Mother had invited me over for dinner.  It was a warm evening so we sat out on the small porch outside the living room. It was on the second floor.  He kissed me a few times then said he wanted to marry me only he wasn't making enough money at the moment but he would work hard and get ahead and then we'd be married."

Larry and Helen married at St. Thomas Aquinas Church on November 26, 1937 when he was 24 and she was 23.   They went to Lake Lawn Lodge for a few days after the wedding for a short honeymoon.  Their first apartment was a furnished apartment located at 5015 W. Washington Boulevard.

In 1938 their first child, Laurence Francis was born and in 1946, their daughter, Elaine Marie was born.

Larry had many jobs, but the two he spent his most years at were with Cruver Manufacturing Company and Weil Pump. His children were the recipients of many wonderful plastic toys from Cruver including small plastic cowboys and Indians, plastic playing cards and dice in all sizes.

He retired from Weil Pump twice.

Posted by Elaine McIntyre Beaudoin at 9:00 PM No comments:

Helen May Sullivan McIntyre was born on March 11, 1914.  Today, she would have been 100 years old. Enjoy a photo video of her life.

Posted by Elaine McIntyre Beaudoin at 9:06 PM No comments:

Email ThisBlogThis!Share to TwitterShare to FacebookShare to Pinterest
Labels: Sullivan

Mom's "The First 90 Years: The Poetry of Helen Sullivan McIntyre" has been accepted for inclusion in the Library of Congress collection.  If you are ever in Washington, DC, stop by the library and take a look at the book.  The call number is: PS3613.C58/F57 2004. I'm thrilled to see it there, it now will be accessible for generations to come.


For one of the first poems written by Helen, click here.

Email ThisBlogThis!Share to TwitterShare to FacebookShare to Pinterest
Labels: Poetry

Even through Helen and Larry McIntyre only had a 900-foot, one-bedroom condo, they managed to invite the entire family over for Christmas in 1970.  Twenty family members joined in the holiday celebrations. This was the last time we would all share Christmas together.


Larry always enjoyed taking videos of family gatherings, but the cameras were not as sophisticated as they are today so the quality is poor, but the memories are very rich.

The "Family" at Sears

Joe is Helen Sullivan's second cousin once removed and Cathy is Helen's granddaughter.


Joe and Cathy are third cousins, once removed.

Email ThisBlogThis!Share to TwitterShare to FacebookShare to Pinterest
Labels: Sears

It is hard to believe you were born 100 years ago today.  A lot has happened with the family since you left us in 1995 so I thought I’d take this opportunity to give you a quick update.

You now have six beautiful great granddaughters.  Mom had the opportunity to meet them all, she can tell you about each one.  Their mothers have all turned into lovely young women and great moms themselves, each with a kind and loving husband and a fine extended family.  Each granddaughter still lives in the Chicago metropolitan area allowing all of us to get together on holidays or for special events.

Remember how you used to take your three granddaughters down to the beach when they came to visit?  Well the six great granddaughters enjoy the beach as much as their Moms did.   When all of the families were here this past Thanksgiving, a highlight of the visit was a walk along the lake.  Despite the cool temperatures, they spent quite a bit of time trekking through the sand and taking photos of each other with their cell phones.  Perhaps you saw the pictures posted on Facebook?

Your two children have also had a few changes in their lives, both marrying wonderful spouses.

Do you recall how we all enjoyed Mom making her great pork and beef chop suey with sides of steaming rice, jiggly green Jell-O with cherries and crispy croissants for special occasions?  She left me the recipe for her “Irish” chop suey so I might just make up a batch in celebration of your centennial.

Have a great birthday and give Mom a hug from us all.

P.S.: I found this photo in Mom’s album, you can show it to your friends who remember you when!

Posted by Elaine McIntyre Beaudoin at 12:30 AM 6 comments: